Most of us can agree that unpaid internships are the scourge of the earth, right up there with 8am lectures, the WiFi going down just as you hit enter, and the people who put empty sweet wrappers back in the tin at Christmas (seriously, why?). Aside from the basic principle that hard work should be paid for fairly, they’re incredibly costly, locking out the thousands of young people who simply can’t afford to drop a couple of grand for the privilege of working for free.

However, despite some three quarters of the public agreeing that they should be outlawed, job sites are still littered with unpaid or ambiguous listings. If you’re a student or recent graduate looking for your first break, it can be difficult to sort through the piles of opaque job descriptions and see what’s legit.

For Alice*, a 21-year-old graduate who was encouraged to apply to a two week internship at a major news brand, it never occurred to her the position wouldn’t be paid. “I honestly assumed they would pay,” she tells Debut. “It was only because a friend who had done it previously told me she hadn’t [been paid] that I realised otherwise.”

“It was in March last year and although I had the maintenance loan and a part time job, paying to be in London for two weeks and the travel during the most expensive weeks of that term left me struggling by the end of April when the next loan came in. It also meant taking unpaid holiday from my job, which didn’t help either. I was working 9-6 most days, and I was in the office by 8am to get ahead on the papers. It wasn’t even a concern for anyone on the desk how I was affording to work for two weeks.”

‘Even if you’re doing mundane tasks like making tea, you’re probably a worker’ 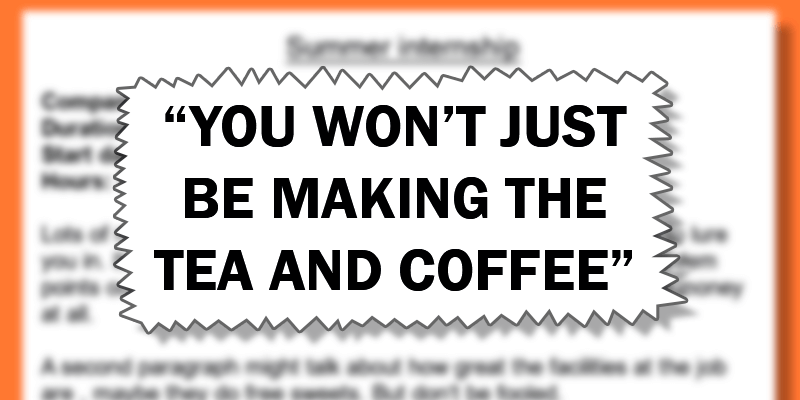 So, just how do you spot a rogue internship in the wild – crucially before you make any effort on lengthy applications – and how can you deal with an offer which isn’t what you thought it would be?

“The issue around internships is a curious one,” explains Tom Mclaughlin, a senior associate at BDBF, a specialist employment law firm. “It’s a common word, but there isn’t really any sort of legal definition or framework [saying what it actually means].”

The question of legality essentially rests on if you’re doing work or not. In British law there are two types of status for people doing jobs, both coming with certain rights and protections. “One is if you’re a worker,” Tom tells Debut. “Workers have rights to things like the National Minimum Wage, and to be automatically enrolled in a pension scheme. The full status, being an employee, brings with it all the rights like maternity pay and rights around unfair dismissal.”

So, the question around pay essentially revolves around whether you’re doing enough work to be classed as a worker or an employee. If you’ve passed the hurdles to be a worker, it’s illegal for you not to be paid for your efforts.

“My personal view is, in relation to the vast majority [of internships], at the very least people are going to be workers,” adds Tom, saying that many would also potentially be classed as employees, meaning they should be entitled to a whole host of rights. As well as, you know, being paid.

“Unless what you’re doing is purely educational in nature and it’s purely about observing a workplace, the reality is that most internships are going to involve doing actual work,” he continues. “Even if you’re doing mundane tasks like carrying bags and making tea, if you’re obliged to do it you’re probably a worker.” So much for all those ads which stress how this internship won’t ‘just’ be making tea and that you’ll have some ‘real responsibility’…

‘No paid workers get reimbursed for lunch. That would be weird’ 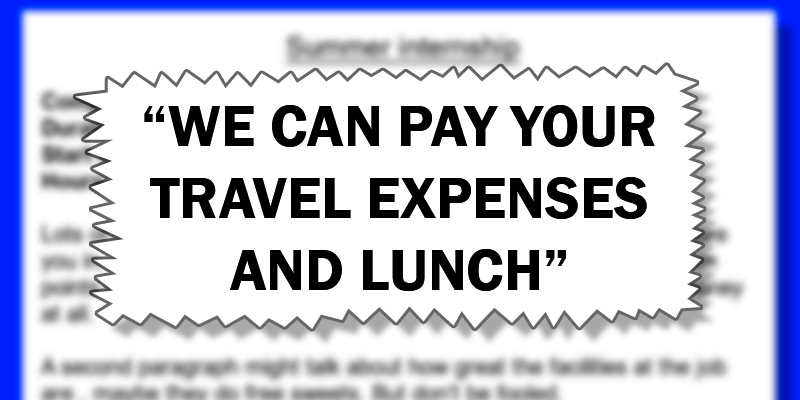 An insistence you won’t just be human version of a kitchen appliance isn’t the only red flag to look out for either. Tanya de Grunwald, founder of campaigning website Graduate Fog, says there are several common bear traps: “The obvious one is saying that expenses will be reimbursed – lunch, travel or both,” she explains to Debut.

While to some it might sound you’re getting a slightly better deal, in fact, it’s almost like an admission of guilt. “It is an admission that the employer should be paying you a salary. No paid workers get reimbursed for their lunch or travel, that would be weird.”

In general, it’s worth thinking twice about any internship which includes things you wouldn’t see normally see in a job description. “Another one is stressing how much responsibility the successful candidate will have,” adds Tayna. “Again, you’d never see that in an advert for a paid role. The final one is saying that there is an opportunity for paid work at the end of it. This is a ‘carrot’ designed to entice you. Unfortunately, graduates find this paid work rarely materialises in practice.”

Should there even be a job description at all? 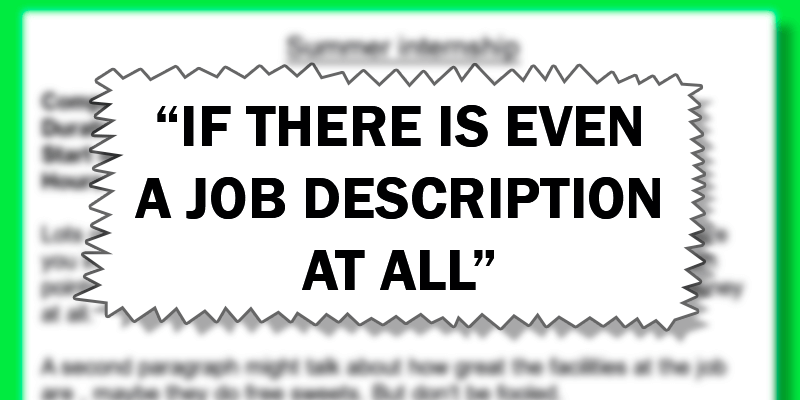 If you’re sensing a theme here, that’s because there is one. Adverts for unpaid internships rely heavily on the supposed benefits of the gig – things like responsibility, gaining experience, or exposure for your work. Essentially, things that won’t be accepted at Maccy D’s when you pop in for cheeky McFlurry because you’ve had a stressful week of work (which you’ve not been paid for).

And then there’s the gaps in information. Perhaps you’ve found your dream job, but no mention of pay or a salary, and you’re wondering if they’re actually planning on paying you for your efforts? “My guess is not,” says Tom. “I think before making any arrangements you need clarity over what’s involved. You need, at the very least, the length and the terms to be set out in writing.”

While it might not be advisable to bombard hiring managers with shed loads of questions before the application process has even begun, if something seems off there’s no harm in clarifying before you waste a lot of time on a pointless application. Sara McCord, a careers writer at The Muse, sets out a few key pointers on how to ask questions early on – essentially, if you’ve checked the answer doesn’t already exist online and you’re straight to the point, it’s probably fine.

But, if the answer is no and they’re not offering any cash, how do you know when they’re asking too much? Well, legally, it’s probably the point at which they ask at all. “If there’s a job description and it lists things you’ll be doing, you probably are doing work and are a worker,” says Tom.

‘I told myself it was worth it at the time, but in hindsight I feel robbed’ 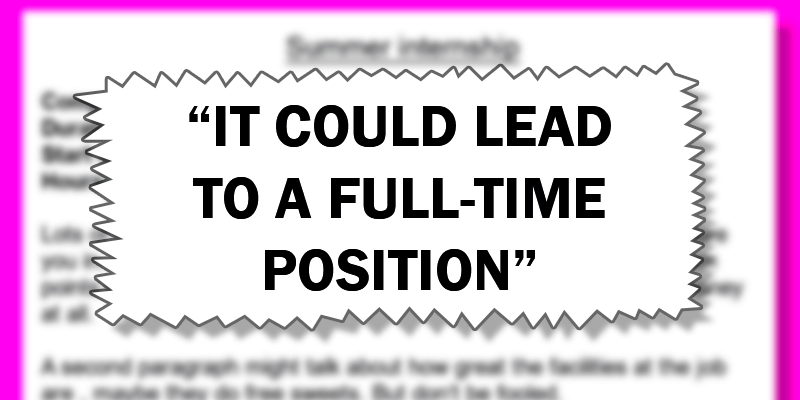 However, even if you try your utmost to steer clear of unpaid internships, the lines between work experience and internships can be incredibly blurry, leaving many young people feeling uncomfortable at how much they’re expected to do, and the reliance of organisations on a steady stream of ‘workies’. For Joe*, who took on a work placement advertised by his university at a successful news website, it ended up with a feeling of being ripped off.

“I told myself at the time it was worth it,” he tells Debut. “I was producing articles each day and getting bylines on a respected outlet. However, in hindsight I feel a little robbed. I produced about a dozen articles in five days, two of which got onto the front pages of subreddits about their topics, and all were shared fairly well. It was a shame all profits made would have just gone straight back to the website, while I was not even receiving any help just to cover the costs of living in London, let alone for the value of my work.”

So, what can you do if you find yourself in a situation you’re uncomfortable with? “There is no easy answer,” says Tom. “You have to make a decision,” alluding to the fact many students are either unable or unwilling to take legal action if something isn’t right.

“The reality is that the majority of unpaid internships are probably unlawful, but the problem is what are you going to do about it? No one is going to want to start their career in fashion by suing one of the big fashion houses.”

“Graduates are stuck between a rock and a hard place,” adds Tanya, something she says underlines “everything that’s wrong about why unpaid internships have continued for as long as they have”.

However, there are options. “Some employment disputes can be solved by having a conversation,” says Tom. Even if the chances are slim, you’ve nothing to lose by explaining your position to employers and that it isn’t sustainable for you to work for free. “The upshot is unpaid internships significantly restrict the pool of people [which means] there’s a big pool of people you don’t have access too.” If an employer really wants to hire you, they should recognise your value and pay you.

“Another option is to do the internship and then claim your unpaid wages afterwards via the Pay and Work Rights Helpline,” says Tayna, although she stresses people should try and avoid taking on unpaid work at all costs. “If you’re worried about your reference you don’t have to do this straight away – you can wait up to six years.”

Ultimately, however, the fight to end unpaid internships rests with all of us. “I don’t think it’s going to be a problem which is going to be solved by individuals bringing claims,” says Tom. “It’s got to be dealt with by people who have the power to do it.” Which means calling out bad employers even if it’s not your industry, and using the power you gain as you progress in your career to make change.

“Even if unpaid graduate internships turn out to benefit some of the people who do them, that means admitting that they lock out everyone else who can’t afford to do them,” adds Tanya. “So, either way, they are unfair, take advantage of young job seekers’ desperation for experience, and exclude everyone who doesn’t have financial support from their family. If something looks like a job, it must be paid.”

*Some names have been changed.

The graduate recruitment industry is changing. But what exactly can we expect to see in the near future? Read on to find out