Which UK universities are working the hardest to support their students to land a career after graduating? Going to university is an opportunity to fly the nest, meet new people and develop as a person, but ultimately, one of the main reasons people choose to study is to improve their…

Which UK universities are working the hardest to support their students to land a career after graduating?

Going to university is an opportunity to fly the nest, meet new people and develop as a person, but ultimately, one of the main reasons people choose to study is to improve their career prospect.

But which of the UK’s universities are setting their students up to graduate with the best chance of success, and gain placements on graduate schemes?

To find out, we’ve submitted Freedom of Information requests to each university in the UK to find out how much they’re spending on their careers services, as well as taking into account average graduate salaries and employment levels.

The Best Universities by Employability 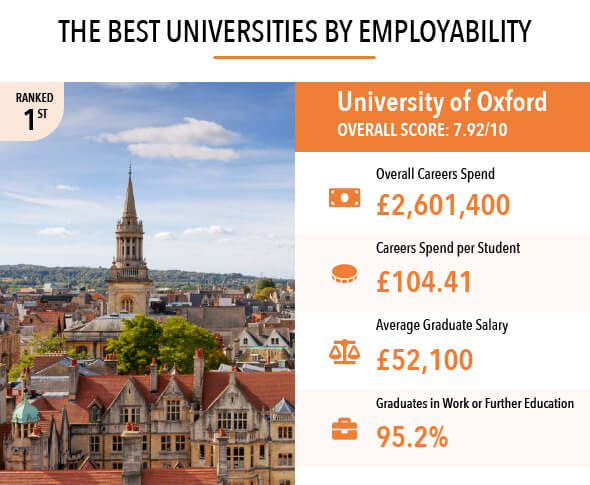 Oxford is rightly held up as one of the elite institutions, not just in the UK, but globally, with numerous world leaders, Nobel Prize and Olympic gold medal winners amongst its alumni.

Employers know that they’re getting the best of the best with an Oxford grad, which is why they have the highest average graduate salary of any university, as well as 95.2% of graduates in work or further education (three and a half years after graduating).

We also found that they have one of the highest expenditures on careers services, with ВЈ2.6m in 2018/19, which works out at ВЈ104 per student. 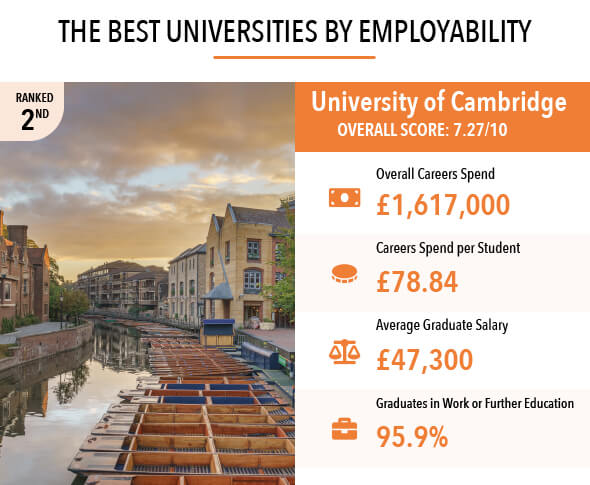 Alongside Oxford, Cambridge is a world-renowned institution and one of the most prestigious in the world and actually ranks as the best university in the country according to all the major league tables.

However, the university just falls behind its Oxbridge rival when it comes to average graduate salary (ВЈ47,300), as well as for its careers spend per student (ВЈ78.84), although it does have a slightly higher number of students in employment or further education in the years after graduation. 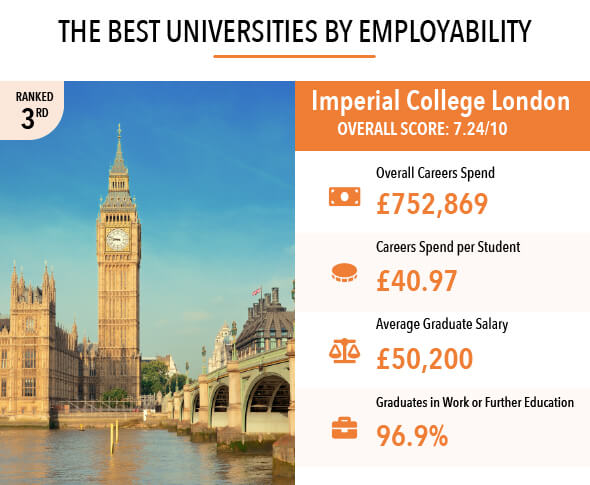 While Oxbridge leads the way, Imperial College London isn’t far behind and is a popular choice for those with an entrepreneurial streak, boasting a wealth of links with top businesses around the world.

While it’s career service spend doesn’t quite match up to that of Oxford and Cambridge, Imperial College actually has a greater percentage of recent graduates in work or further education than both (96.9%), as well as a greater average graduate salary than Cambridge (ВЈ50,200).

>We sent out Freedom of Information requests to each university asking how much they spent on their careers service in the 2018/19 academic year, before estimating how that breaks down per student. 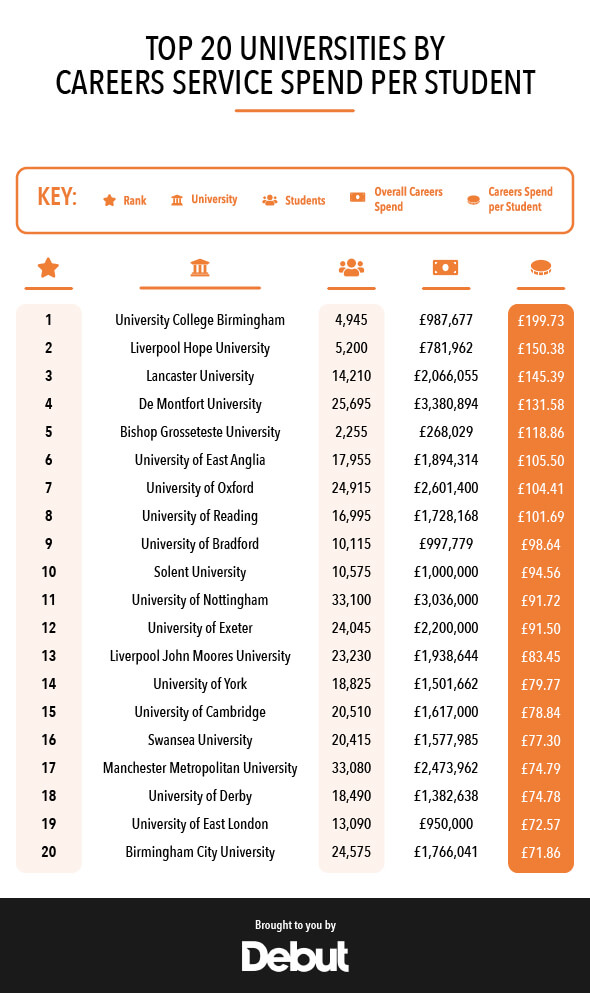 Oxford ranks as the university where you’re likely to earn the most after graduation, with ex-students earning an average of ВЈ52,100 a year by the time they’re 29. Second place goes not to Cambridge, but to Imperial College London, where graduates can hope to earn around ВЈ50,200. 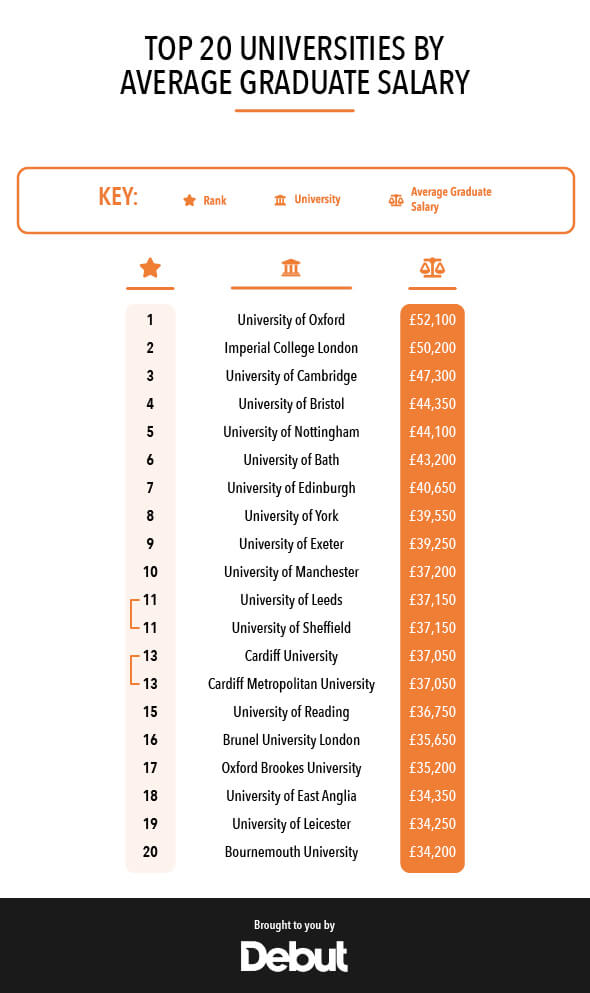 Top 20 Universities by % of Graduates in Work or Further Education

Imperial College also takes top spot when it comes to the number of graduates who are either in work or carrying on their studies with 96.9% of graduates in either three and a half years after finishing their course). They were followed by Keele (96.6%), Lancaster (96.5%), Cardiff (96.2%) and Cambridge (95.9%). 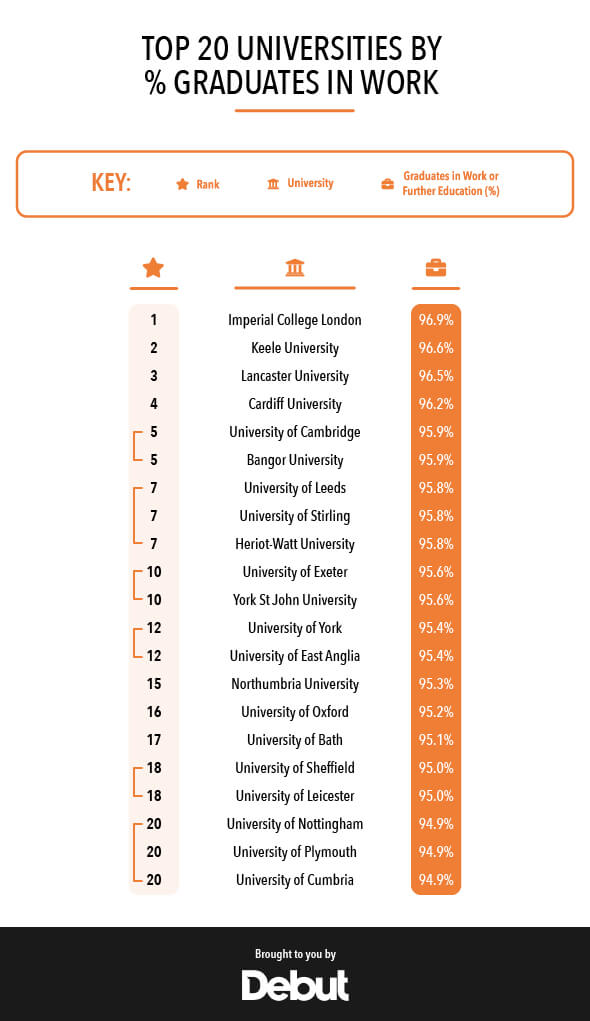 We ranked each of the institutions on the following three factors, giving each one score out of ten for each factor.

All careers service expenditure data was obtained via Freedom of Information requests sent to each of the UK’s universities and refer to the 2018/19 academic year. Note that due to the different ways in which universities arrange their budgets, the figures may not be directly comparable and may not fully reflect the institutions’ spending on careers. Any universities which failed to respond have been omitted.

Obtained from the Department for Education’s “Undergraduate degrees: labour market returns” dataset (Table 15), which shows the average earnings for graduates of each institution at age 29. For each, we took an average of the estimated earnings for male and female students.

Graduates in Work or Further Education (%)

Obtained from the Destinations of Leavers from Higher Education Longitudinal Survey, which shows the activity being pursued by graduates three and a half years after completing their studies. For each institution, we took the number of graduates who were either in work (whether full-time, part-time, voluntary or unknown) or in further study (or combining work and study).