These are the universities being targeted by graduate employers

Ever wonder whether those hokey promises and statistics you read in your university’s prospectus were actually true? You know, about how 99.987% of students get jobs after they graduate and how they’ve got the most ancient furniture per square foot of any uni in the country?

Well, we can’t prove that last one, but we can tell you to what extent your uni is being targeted by top graduate employers. You’ve seen them at them at your careers fairs, you’ve seen their flyers for drop-in sessions on your faculty noticeboard. And they’re always watching.

The average employer targets 20 universities when it comes to hiring recently graduated students. But which are the most targeted universities and by who? The good people at High Fliers published a huge report that reveals just that. Here are the headlines.

Universities targeted by the largest number of top employers 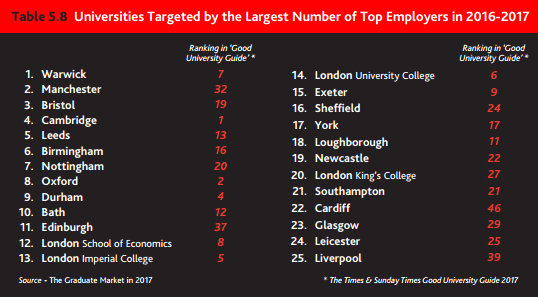 Now this right here might seem a tad surprising. As you can see, the top 5 most targeted universities are Warwick, Manchester, Bristol, Cambridge and Leeds. But just one of them, Cambridge is in the top 5 for The Times and Sunday Times Good University Guide 2017.

Oxford is, once again, shockingly out of the top 5 after landing at no. 14 on a list of universities producing top executives. So if you’re worried about your career prospects because you’re not at OxBridge, you really needn’t be. 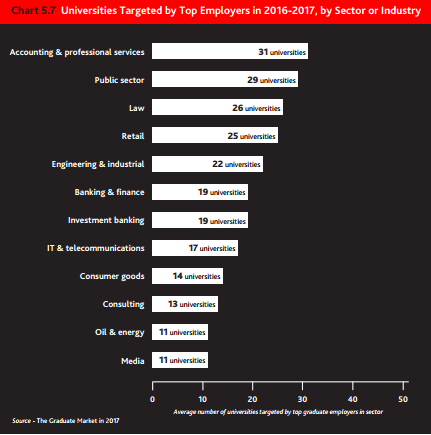 This lines up pretty well with the rest of High Fliers’ research, which showed accounting and professional services firms are looking to increase the number of grads they hire. They’re targeting eleven more universities than the average sector.

Do with that information what you will. 😉

If you're an Arts and Humanities student who isn't sure what to do with their degree, here are some alternative careers paths you might want to consider. You could be the next James Bond or Louis Theroux...

These 11 UK universities produce the most employable graduates

Times Higher Education's Global Employability Index has ranked the universities which produce the most employable graduates. Is yours on the list?