Which universities have the highest & lowest dropout rates & how does leaving your course affect employment opportunities? Earning a degree can be an excellent way of opening up doors to a wider range of career opportunities, with many jobs now making it a qualification a requirement for…

Which universities have the highest & lowest dropout rates & how does leaving your course affect employment opportunities?

Earning a degree can be an excellent way of opening up doors to a wider range of career opportunities, with many jobs now making it a qualification a requirement for candidates. However, university isn’t for everyone, and for some, it may not turn out to be the right decision.

But, which UK universities have the highest and lowest dropout rates? Our insights team studied the data from over 140 of the country’s higher education institutions to find out.

The UK universities with the lowest dropout rates

Our research shows that Oxbridge is the best at retaining students, with the University of Cambridge losing just 1% and the University of Oxford losing 1.2% as dropouts. As the two highest ranked universities in the country, it makes sense that students are less likely to leave their studies before graduating.

When looking at the top 10 universities with the lowest dropout rates, most can be found in the top 20 on the Complete University Guide’s league table, with just two that rank outside of this – St George’s, University of London (ranked 47), and the University of Sheffield (ranked 33). 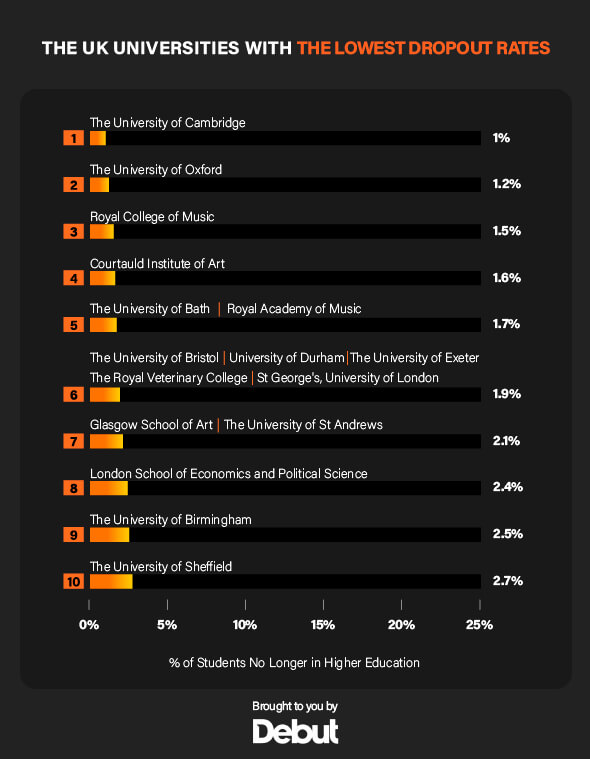 The UK universities with the highest dropout rates

1 in 5 students drop out from London Metropolitan University; the highest in the UK

We’ve found that the university with the highest dropout rate is London Metropolitan University; an institution which loses a staggering 18.6% of its students, a total of 180 out of 980 students who enrolled to study.

Reflecting the likes of Oxford and Cambridge, London Metropolitan University sits near the bottom of the league table at 126, just five places above the lowest-ranked institution.

Middlesex University is the only institution in the bottom 10 that ranks in the league table’s top 100, seeing a dropout percentage of 12.6% but a ranking of 89. 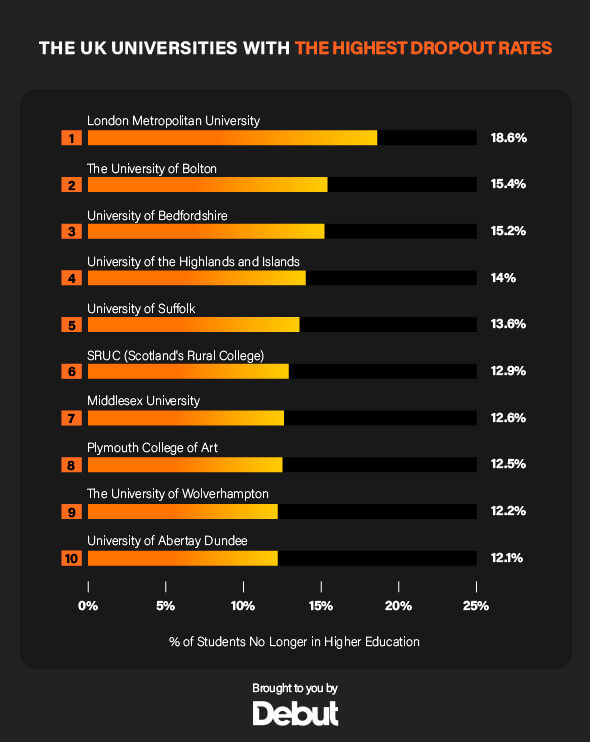 The 10 year differences in dropout rates

Across the UK dropout rates have decreased by 1.1% since 2008

Between the 2007/08 academic year and 2017/18, some universities have seen huge differences, with a number of institutions decreasing their dropout rate, while others have seen it increase.

While we can see that some universities have higher dropout rates than others, the same is true for the subjects which students study. 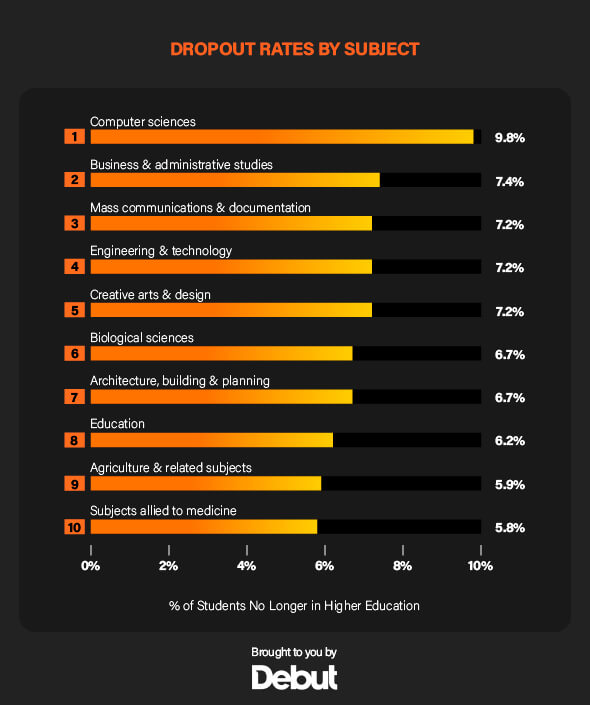 When we look at the difference between 2007/08 and 2017/18, we see that every subject has seen a reduced dropout rate, although some have seen a far more dramatic decrease than others.

Combined subjects have reduced their dropout rate by 23.8%, while physical sciences has dropped by 12.7%.

Medicine, dentistry and veterinary science saw the smallest drop of 1.4%, followed by education which had a reduction of 3.4%.

While there are some universities that have actually increased their dropout rate, it seems that, overall, more students than ever are completing their studies in some capacity, with the top institutions in the country hanging onto their students most consistently.

If you drop out of your university course; what does this mean future employment opportunities?

“Leaving an undergraduate course before completion does rule out some opportunities, but opens up many others.

When we speak with candidates, they are often really surprised at the companies with opportunities that are still available to them for Higher / Degree apprenticeships and graduate schemes.

The apprenticeship levy has changed the landscape. Not only is there a much bigger incentive for employers to bring on apprenticeships, but the data suggests they are often much better value. Retention rates are roughly double that for graduates and often the employee can contribute positively much earlier on.

Companies that are at the forefront of this revolution and a number of companies have a significant number of vacancies in these areas including large employers like Capgemini and EY.”

We used the university league tables from the Complete University Guide to get the rankings for each institution.