If the office were an ocean: a guide to workplace personalities by Blue Planet II

What if the office were an ocean? Blue Planet II gave us lots of insight into what lies beneath the surface, but it can tell us plenty about workplace personalities.

This post was written by a member of the Debut Contributor Network. Using the magic of Blue Planet II, Charlie Duffield gives us a crash course in workplace personalities.

Way back in 2017, the undisputed grandfatherly don of wildlife television, Sir David Attenborough, graced our screens with the spectacular Blue Planet II series. Camera crews offered unparalleled footage of life brimming within our earth’s oceanic depths, whilst Attenborough contributed his warmth and wisdom via voiceover to spectacular effect; the programme was deservedly the most watched of the entire year with more than 17 million viewers.

As we set sail into a new year, January offers a very different connotation of ‘the blues’, with the return to real life and responsibility after festive downtime. But if Blue Planet II taught us anything, it’s that we’re more interlinked with the ocean than we think, and marine life need not feel so far away…

Here’s a reminder of some of the defining protagonists seen on screen, cross examined with some familiar workplace personalities you’re bound to encounter back in the office. 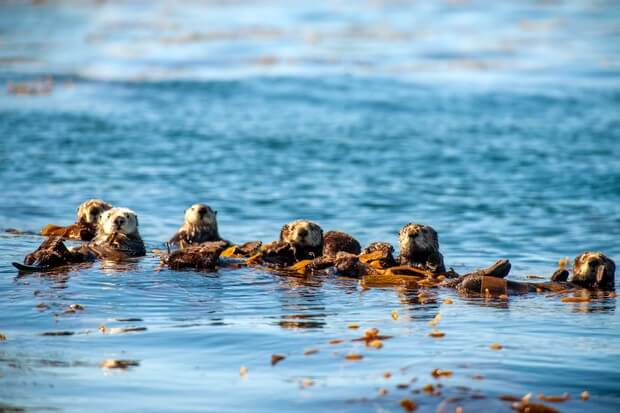 As the heaviest members of the weasel family, these playful marine mammals eat 30% of their body weight a day to sustain themselves. Having once faced near extinction, they’re now so populous they can form rafts amongst themselves, and even fall asleep holding paws to prevent them drifting from each other.

In your office –  With highly developed social skills, extroverts thrive in office environments and the constant human interaction provides a lot of scope for tomfoolery. Every office has a quasi-comedian character – the office joker.

They’ll use any excuse to initiate distraction in exchange for a barrel of laughs or suppressed guffawing, all for the sacred cause of…’banter’. But just as the fun-loving sea otter plays a vital role in maintaining kelp forests…well, the office ecosystem would be inordinately drab without them. 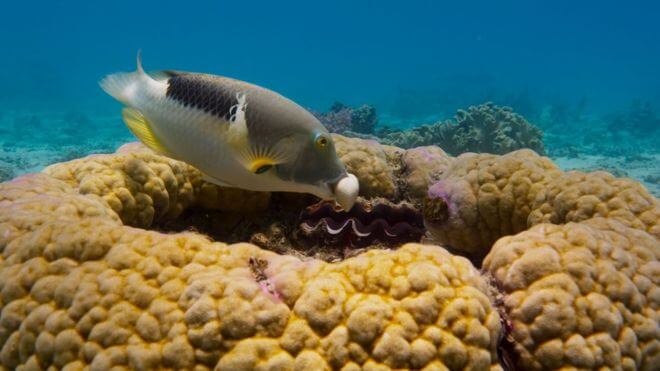 The Blue Planet II team became so fond of their tusk fish they named him Percy the Persistent. They filmed this ingenious fish swimming to the edge of the reef in search of a small clam for brekkie, before spending an hour relentlessly bashing the clam repeatedly on rocks until it cracked open. That’s commitment.

In your office –  Pure and simple, the heads down hard grafter. They know that nothing great is ever achieved without hard work, and always deliver the goods. 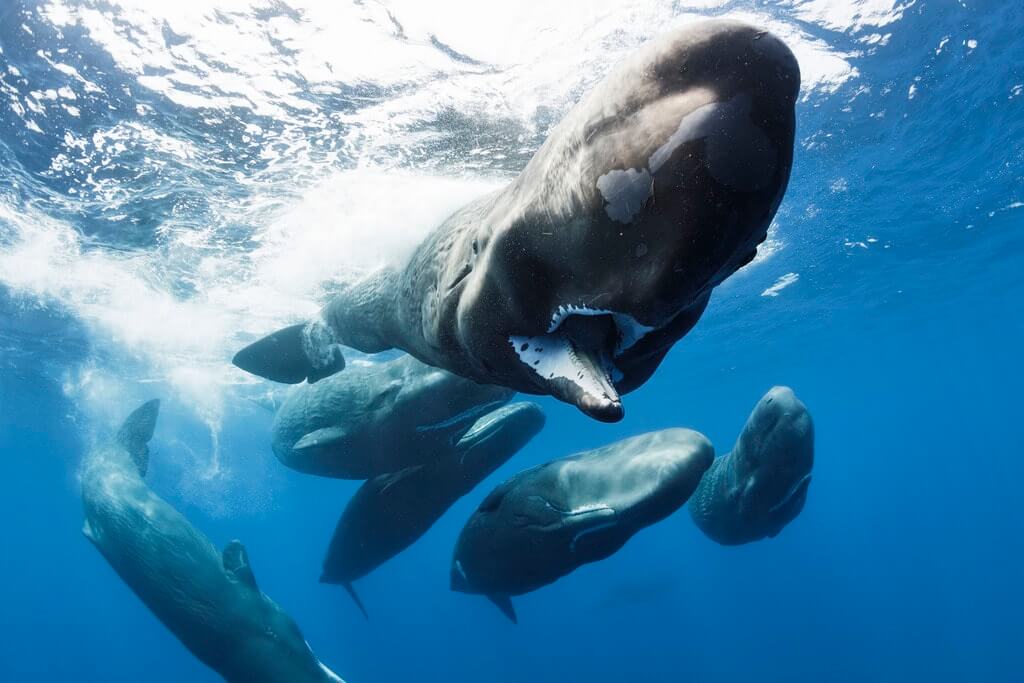 No snickering at its name please… These gentle giants are owners of the biggest brains on the planet, and use sonar signalling to effortlessly hunt for squid in the murky ocean depths.

In your office –  The clever clogs; the IT whizz, speaker of twelve languages fluently, video ninja or PowerPoint extraordinaire. These supremely skilled experts possess niche talents which regularly blow your mind. There’s no such conundrum as ‘transferable’ skills here, just employees with real market value and pragmatism. Their showmanship may be understated but everyone knows they’re the revered masters of the workplace. 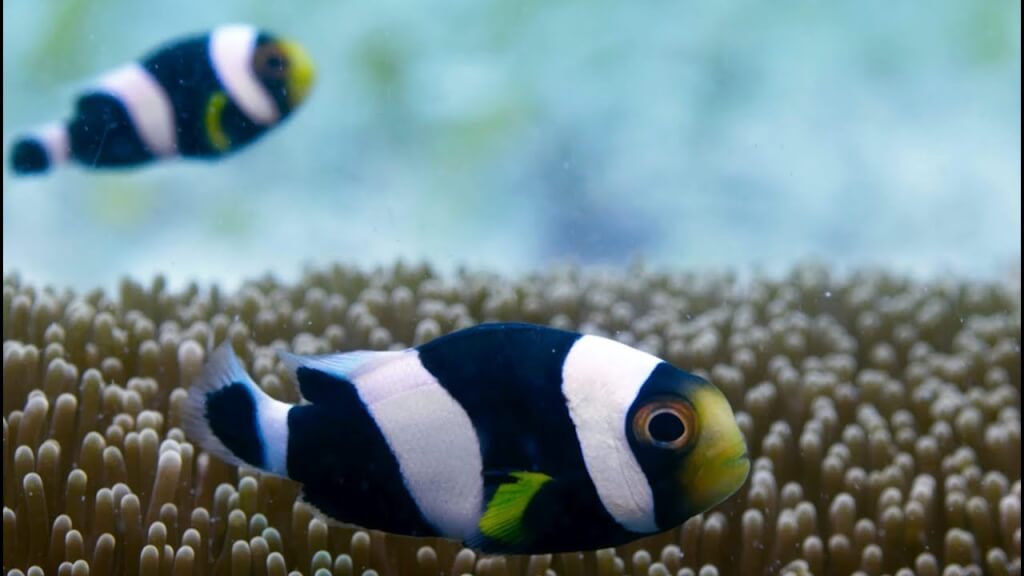 You’ll probably recognise these aquatic animals, but did you know the saddleback clownfish is an especially talkative fish? They spend all day noisily communicating amongst their clan to protect themselves from the many predators, such as coral trout, hunting around Southeast Asia’s reefs.

In your office –  Gossip Girl 101 calling. Nothing beats a solid natter – by the water cooler, in the lift, en route to another unnecessary meeting, loitering by your desk. If you’re having a lonely sort of day, you’ll be grateful for the office chatterbox.

But when your workload hits peak intensity, you’ll want to by-line the in depth chit chats about your lunch choices and neighbour’s love life for productivity’s sake. Just don’t underestimate their ability to diffuse office based awkwardness and tension like a pro with their gift of the gab. 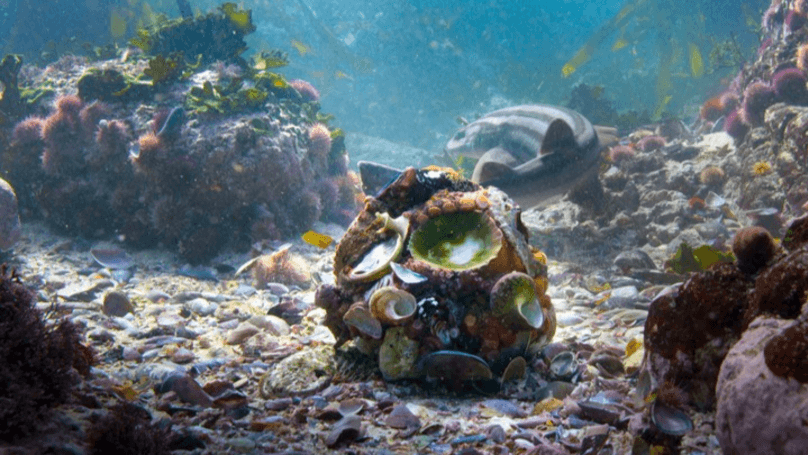 An eight-armed mollusc that’s able to change colour and shape shift? It might sound more like a beastie conjured up within Harry Potter’s universe, but the fearless female octopus dwelling in South Africa’s green seas is far from fictitious. Whilst being attacked by a pyjama shark, she’s filmed fashioning a shell suit for herself, and successfully outwits her predator whilst being applauded as an utter rock star by the doting crew.

In your office –  They might not have eight tentacles, but they’re still able to juggle a million errands with ease. Their plethora of skills and quick-thinking mind-set ensure that the multi-tasker  is a force to be reckoned with.

There are many more personalities lurking within our water depths to explore, and every creature, great and small, has their part to play. When the Blue Planet II team camped out to witness the awesome strategic planning of sea lions hunting yellow fin tuna in the Galapagos Islands, they showed us how even sea animals intuitively understand that team work makes the dream work.

Nevertheless, if you watched the entirety of the series, you’ll recall the heart-breaking final episode exposing the suffering humans have inflicted on our seas and the bountiful life within them. Perhaps your new year’s resolution is to do your bit for ocean conservation. Cut out single-use plastics and only eat sustainably-caught seafood, if at all.

And whilst you’re saving the great seas, it pays dividends to cast your net a little wider; in the annual schlep back to work, remember that – just like the oceans – our sensitive office eco-systems, and the multifaceted teams within them, need preserving too. As David Attenborough concluded, ‘the future of humanity, and indeed life on earth…now depends on us.