If you identify as LGBT+, it might be time for a Scandinavian getaway. A new study from business price comparison firm Expert Market has revealed that Norway is the best country in Europe for LGBT workers. 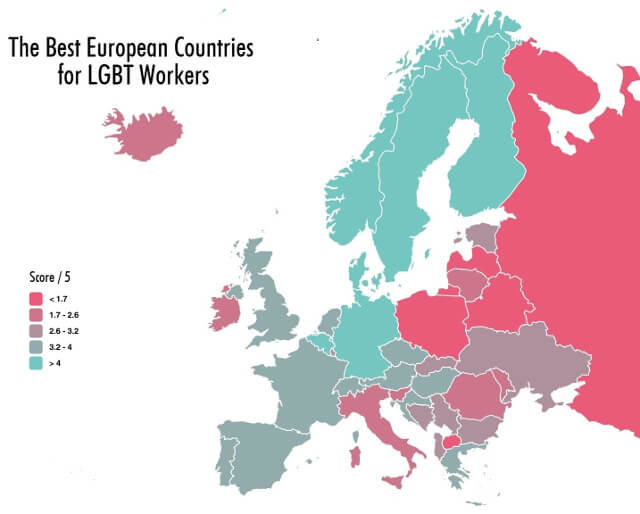 “Norway has the best protections against discrimination you can have, and tolerance is also quite high,” said Expert Market’s Benjamin Pelosse when asked to explain the findings.

“The unemployment rate is low, the disposable salary is high. If I am an LGBT worker, it’s one of the best countries to be in for sure.”

Here’s how they did it

Last year, Norway introduced a groundbreaking law allowing citizens to legally change their gender without medical intervention. They became the first country in Europe to do so after Argentina adopted the law in 2012. It also dropped the age requirement to change gender from 18 to 16. Amnesty International hailed the change as “a historic move for transgender rights”.

This and many other legal protections that LGBT workers enjoy earned Norway a perfect score of 10 in the law and policy category. The United Kingdom, which landed in 9th place, scored just 2.5 in the same space.

This isn’t even all the evidence that proves that Norway is basically a careers utopia. Norwegian workers also enjoy lengthy paid maternity leave, free university education, and long-term unemployment benefits.

With the UK also battling a significant sexuality pay gap, it might be time to introduce some more progressive legislation like our Scandinavian cousins. Could employment laws like Norway’s work in Britain? Shoot us a Tweet @DebutCareers and let us know how you feel.

8 things you can do to make your commute more productive

Your commute doesn't have to be 30 minutes of mindless daydreaming. Here are some simple but effective ways of making the time more productive.

Why you should use Twitter to keep up with academic research

Twitter can be used for more than just browsing memes. You can keep up with the latest academic research, which can be beneficial for loads of reasons...