Let’s be real. Despite all our efforts, 2017 isn’t off to the best start. Uni costs more, Trump will be president soon, and Chris Brown and Soulja Boy will soon face each other in a boxing match over a stray Instagram like. So to take your mind off it, how about some good news? 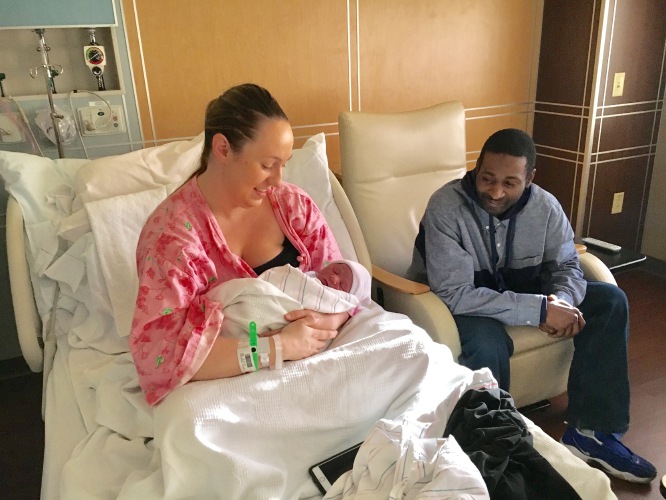 This adorable family is Lamar Austin, his wife Lindsay, and baby Cainan. Born at 7:44am on January 1st, Cainan became the first baby to be born in the American city of Concord, New Hampshire in 2017. He was blissfully unaware, however, of the fact his father had lost his job mere minutes beforehand.

Lamar was working a night shift as a security guard when he got the call that his wife had gone into labour. Not wanting to miss the birth of his son, he left his post at 4am and drove them to the hospital. He would later be terminated by his boss via text.

But here’s where it get’s good.

Sara Persechino, a campaigner and mother-of-two started a GoFundMe campaign to raise finances for the military vet, his wife and their four children.

Lamar Austin missed work for the birth of his son, and was fired. You can help: https://t.co/CEy7e7CmmM #NH

That campaign soon garnered a whole bunch of support.

.@SaraPersechino is right – no one should have to choose between their family & their job! #nhpolitics #familyleave https://t.co/ASd5XNwuPW

Now, not only have donations come in for the Austin family from all over the world, but Lamar has been offered multiple new jobs

Support is flowing from all over for Cainan Austin’s family, including Scotland & Australia. Thank you all! https://t.co/CEy7e7CmmM

And a plethora of people embraced the good news, but raised the valid point that Lamar is a lucky one among many.

Others shared their own similar stories with not-so-happy endings, whether it be maternity leave…

It’s definitely raised a hot-button issue, with New Hampshire law stating that Lamar’s employers aren’t legally wrong for terminating him. We might be a little bit more compassionate with worker’s rights on this side of the Atlantic, but hey, we’re not perfect either.

So let’s remember that there’s still a lot to be done, but let’s relish this small showing of humanity. And hopefully by the time Cainan grows up, the world of work will be an even nicer place.

9 Christmas jumpers that are so 2016 it hurts

This holiday season, immortalise your favourite aspect of what's been... um, an interesting 12 months with these snazzy 2016 Christmas jumpers.

Knowing when to take a break for your mental health

During stressful times, students can neglect their needs for the sake of studying. Spot the signs for when it's best to take a break for your mental health and look after number one.