HUGE careers news inbound this morning. The internet monsters and specialist time thieves at Facebook are due to start rolling a major new update today. The new functionality will allow businesses to list jobs and field applications all within the realms of the social networking site.

The ingenious addition will allow Business Pages to post job openings to their News Feed using the status update function. These listings will include an ‘Apply Now’ button, which users can click to instantly send an application through Messenger. Facebook will even pre-fill in your name and profile pic to help the general effort.

Facebook had been testing the feature as early as last November. Now, it seems, it’s ready to be rolled out in the United States and Canada. As it stands, there’s no information on when the rest of the world can expect it.

The move is expected to muscle heavily into the space of online recruitment giants like LinkedIn and Glassdoor. Mixing the recruitment experience with Facebook’s already-strong social element is expected to make it easier for small and medium-sized businesses to recruit people than ever before. Especially those seeking part-time or casual roles.

In doing so, Facebook has opened itself up to an audience that those sites, geared at more high and medium-skilled roles, previously failed to recognise. 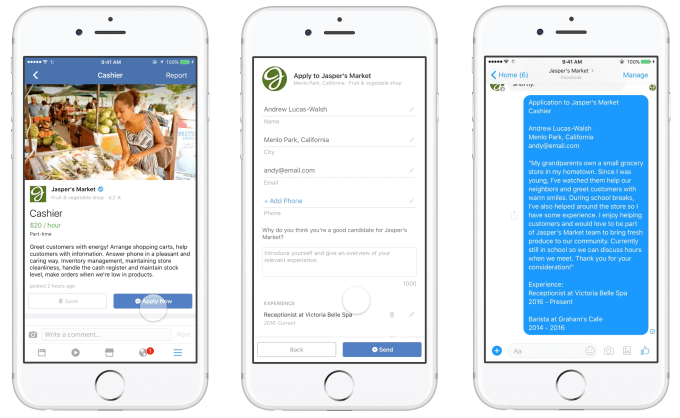 Mark Zuckerberg’s quest to put the entire experience of life online seems to be picking up ludicrous speed. Not to mention the social media juggernaut is about to make a ton more cash from advertising revenue.

But the move will also have great benefits for everyone, making the whole process of finding a job super streamlined. That’s something we can definitely get behind!

8 things you learn in your first year as a graduate

There'll be things you learn in your first year as a graduate you'll never forget. External contributor Rachel Fernie tells us about lessons she learnt.

Competition: Win £200 of Jessops Vouchers and Get Featured On Debut

Want to win £200 and have your photograph featured in Debut and seen by thousands of users? Details right here!