Often, millennials are labelled ‘entitled’, yet we’re the generation least likely to own a house of our own. The National Housing Federation has stated that you’d need an income of almost £130,000 a year to afford a mortgage on the average home. With the mean salary in London hovering steadily at £34,000 a year, this, err, doesn’t bode well.Which brings us on to the topic of our last #DebutTalk: Millennials and Money.

Talking about money isn’t just about discussing the best money management tips. Our #DebutTalk participants dived deep this week, talking about their money insecurities, challenges, and what they think the future of finance will look like. Let’s take a look at the best insights:

Q1. What is the biggest money challenge for millennials? 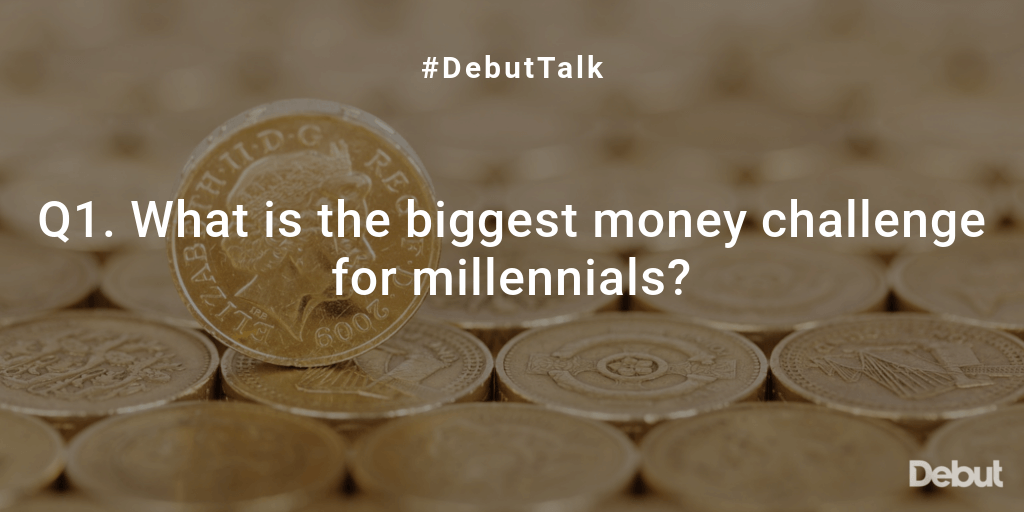 A1. Finding affordable accommodation that is both livable and within 40 miles of anything #DebutTalk

A1. I have no idea when I’ll be able to afford a house *ever*. And I’m bleeding money in rent. It’s massively overwhelming #DebutTalk

@DebutCareers A1. High rents, especially in London; salaries haven’t grown enough to keep up, except in a small number of sectors #DebutTalk

A1: For me it was having the pressure of becoming completely independent asap. Stop asking parents! #DebutTalk https://t.co/fKWUhmgQjO

A1. Using your income to pay rent and bills and then having your disposable stack looking slim like Shady. No room for enjoyment. #DebutTalk https://t.co/tmXJCJH0mV

Q2. Would you rather spend money on experiences or things? 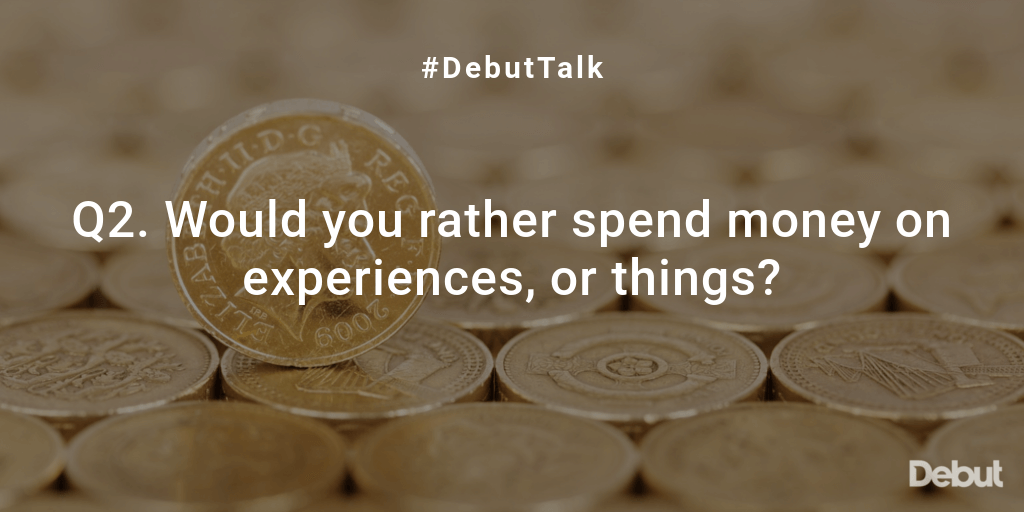 A2. I’ve lived a nomadic life, so I’d much rather spend money on experiences. Apparently this is a ‘millennial’ thing #DebutTalk https://t.co/73YF4LZNeN

A2: I would definitely rather spend money on experiences. For example I save up quite a bit for travelling #DebutTalk #wanderlust https://t.co/IDffIffwAo

A2: I mean. If I could afford diamonds I could be tempted. But with a package holiday being cheaper I’ll take that! #DebutTalk ‍♂️ https://t.co/Z9wi8otLcm

A2. My lifetime spend on gig + festival tickets says experiences. Imagine having bare stuff but nothing to tell your grandkids. #DebutTalk https://t.co/vWctL5TExv

A2: definitely experiences! But bcs of deadlines & me always trying to catch up with work aka no time, I end up getting “things” #DebutTalk https://t.co/e8lRppfbdu

Q3. Have you ever used ‘alternative banks’ like Monzo, Loot or Atom Bank? 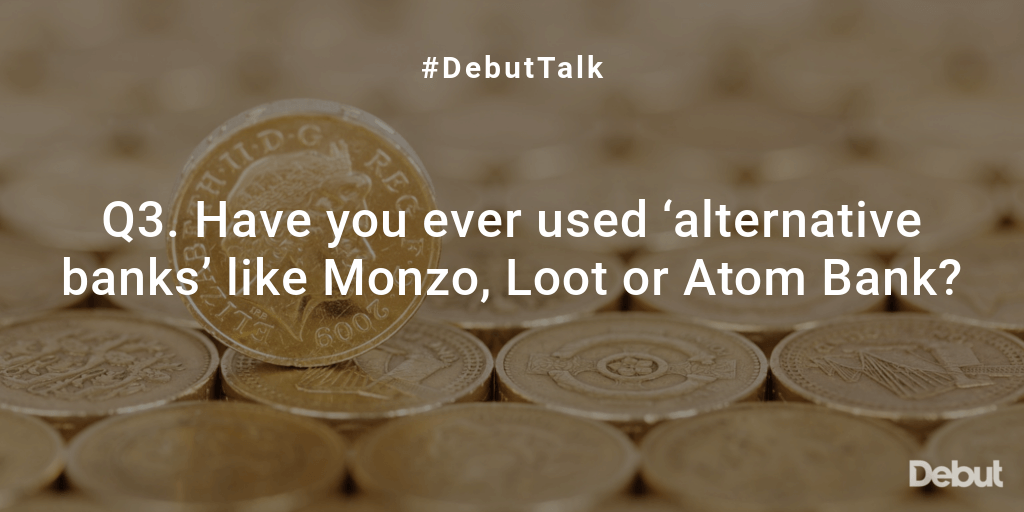 A3: Sadly no. But that’s because I had it set up for me when I was younger by my parents and have never changed! #DebutTalk https://t.co/Tu2CcH0Kbe

A3. No, but they sound very intuitive and cool. Only a matter of time before big banks develop to catch up. #DebutTalk https://t.co/YSneezcFNQ

listen. LISTEN!!! Let me tell you about the Gospel of @monzo… #DebutTalk https://t.co/lRxm5kCli4

I tried so many virtual banks before to (1) budget money, (2) consolidate finances, and (3) be part of my quantified self project #DebutTalk

Just when I lost hope, @monzo comes through. Did I have to wait ages while it was in closed beta? Yes, but it was worth the wait #DebutTalk

Now I’m at a point where instead of wasting of money like I used to I’m investing it. And *this* is the Gospel of @monzo. #DebutTalk pic.twitter.com/RdOInqemNN

(now, do I still overspend on @Dominos_UK ? sure, but that’s besides the point. @monzo WILL CHANGE YOUR LIFE . ) #DebutTalk

Q4. How ‘clued up’ do you feel you are about your finances? Did you get enough information at school/university? 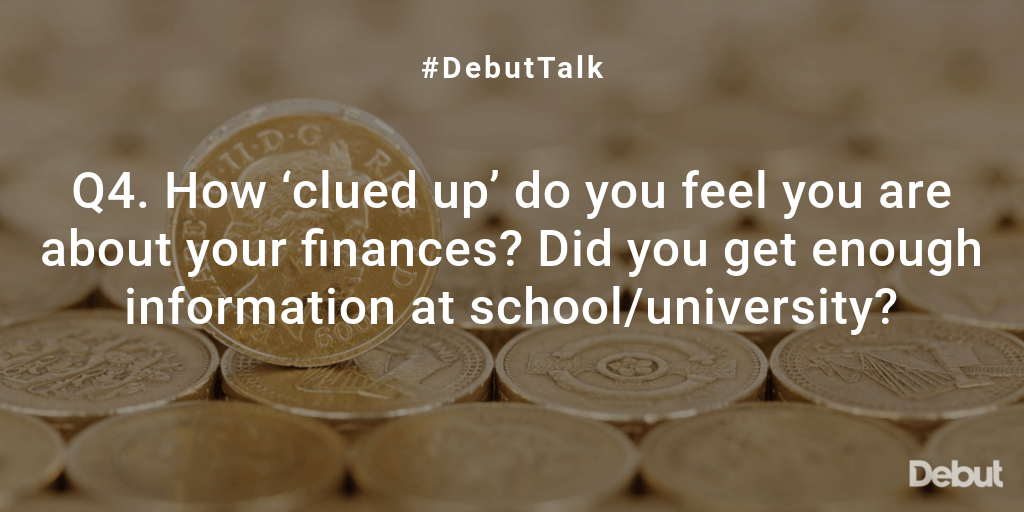 A4. Went to a private, posh school. My goodness, NO ONE knew anything about the value of money. We weren’t really taught either #DebutTalk https://t.co/OYiTmbGeRU

@DebutCareers A4. Probably not. E.g. I can’t remember learning about tax returns, which it took me ages to fill out last month. #DebutTalk

A4: No information whatsoever was given to us at uni. It was a given that parents had to pay for most of it. #DebutTalk https://t.co/iMgDzfO1Jz

A4: not as much as I’d like/expect to be! Things like taxes, interest rates & investment are words I only ever heard from family #DebutTalk https://t.co/71KvyMecqy

A4. Things beyond general personal finance is murky. My school didn’t teach it and I frequently google terms/tips #DebutTalk https://t.co/CTCTSvUQxM

Q4: very little education about it. Most underestimated personal finance fact? Get a pension as soon as possible! @DebutCareers #debuttalk

Q5. Does the state of your finances ever affect your mental health or relationships with other people? 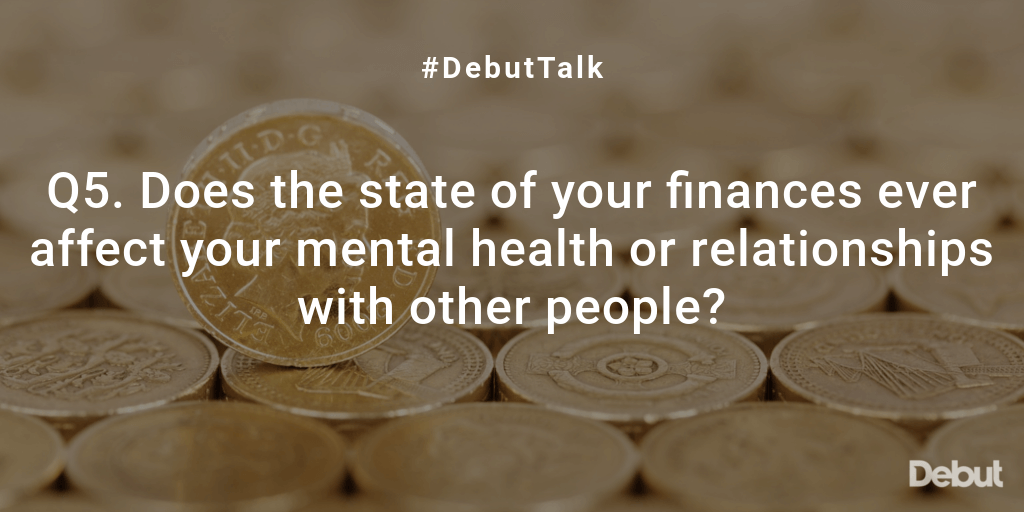 A5: I do worry about money a fair bit. About the future. But I don’t think it puts strain on my relationships. #DebutTalk https://t.co/BRc6WdsdWW

A5: Sometimes, anxiety creeps in, as my future plans might be in danger: I’ve some money saved, but… #DebutTalk pic.twitter.com/NWL5VA22Db

A5: unfortunately often people associate their personal value with their net worth. So no money= no value. WRONG! #debuttalk @DebutCareers https://t.co/Tnt4c3CNN0

A5. No but I think good management and not ignoring/putting off is key, you feel more in control and can then forget about it #DebutTalk

A5a: like how socialising = food it can also mean sacrificing your groceries & meals for 3 days for that 1 fancy birthday meal #DebutTalk https://t.co/L3TmUzjgS0

A5b: I used to avoid social gatherings bcs I didn’t know how to balance my daily life w/ the occasional splurge & it made me sad #DebutTalk https://t.co/L3TmUzjgS0

Q6. What is the best piece of money management advice you’ve ever heard? 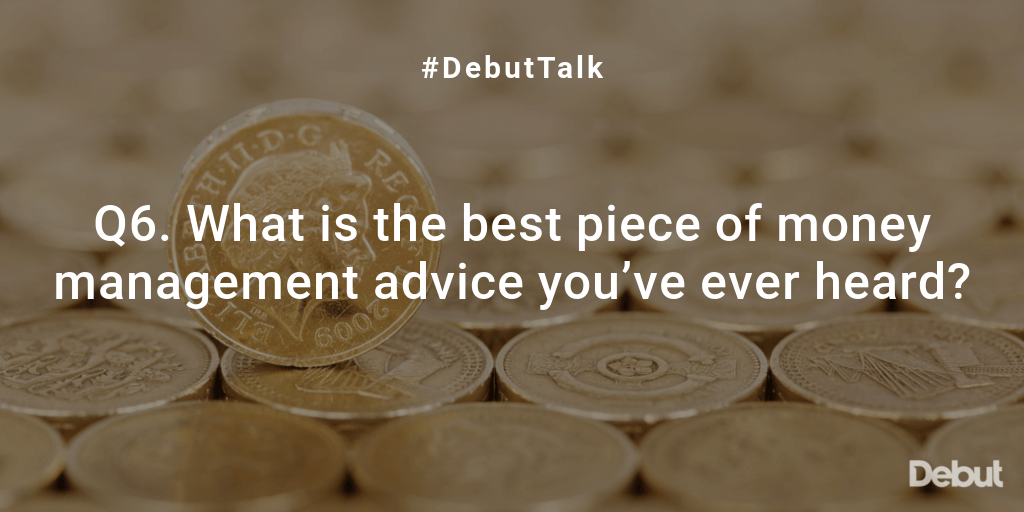 @DebutCareers A6. Beware plastic. Cards make it easy to lose track of how much you spend a week, especially contactless. Use cash #DebutTalk

A6. Keep a log, as best as you can. And don’t ever avoid looking at your bank balance. #DebutTalk https://t.co/Blth535CXy

A6: Budget! Track your savings. I check my bank account a lot, so it’s a never a surprise to me if I’ve over or under spent. #DebutTalk https://t.co/RKdcrGKrkj

A6. “Don’t spend money on something unless you can afford to buy it three times.” Saved a fair amount with that little gem. #DebutTalk https://t.co/1KVNMCYt5W

The next #DebutTalk is on Company Culture, and will be guest-hosted by FDM Group. See you there!

The government's new Education Secretary Damien Hinds has said that children need to be taught valuable 'soft' workplace skills for the future.

How to save money once you stop officially being a student

Missing the perks of your NUS card? Don't worry we've got you covered, this is how to save money when you're no longer student.