A third of employees seek other jobs after performance reviews

Adobe recently conducted a survey of 1,500 American workers, measuring their responses to annual appraisals. The bottom line? Not only are they a waste of time, but they cause enough stress to drive employees to look for other work.

Traditional performance reviews: how they are affecting workers 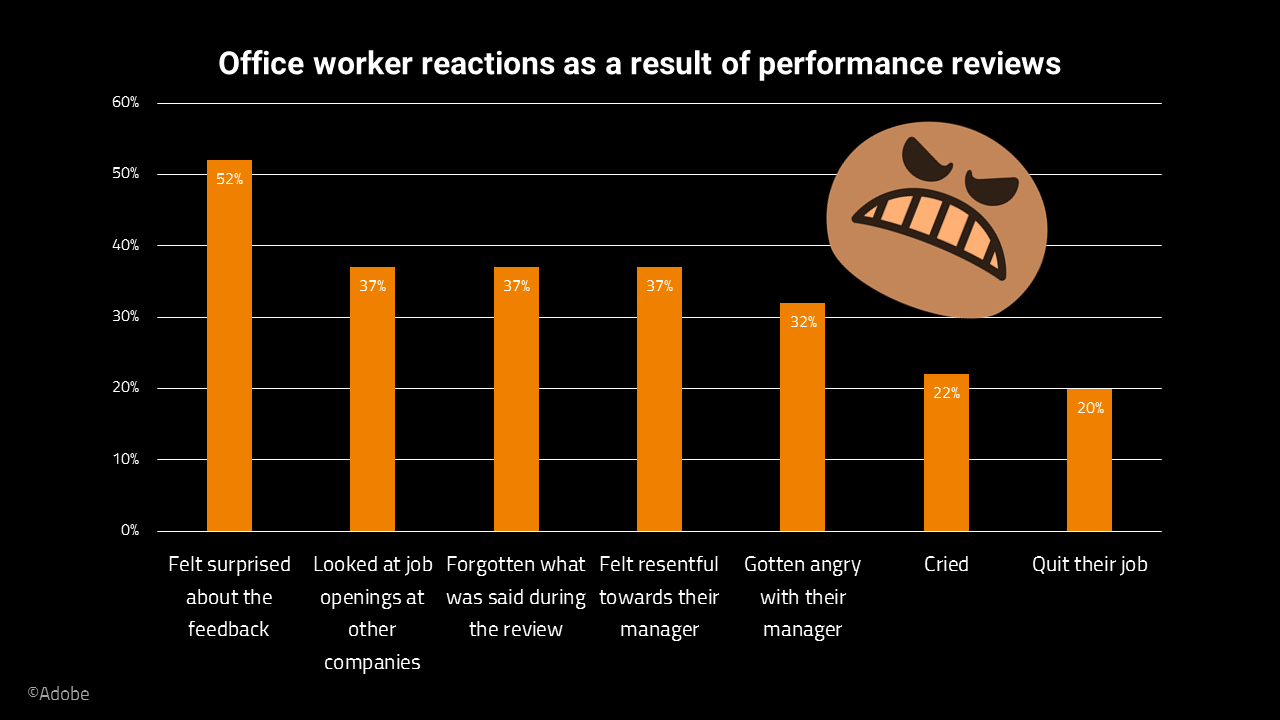 Overall, the survey results highlights how appraisals tend to take employees by surprise. 52% were taken aback by the feedback, 37% leave the room feeling resentment for their manager, and 22% of workers cry after the session.

What does this show us? Well, the underlying issue here is that employees don’t seem to see the bad news coming. An annual performance review is often the only touch point between manager and employee in the year. Therefore, any grievances are perhaps raised in bulk rather than spread out over time. Imagine going into a meeting with your boss expecting everything to be peachy, but hearing that you’ve been doing multiple things wrong for six months. I would be pretty stressed too, tbh.

How the annual review should change in the future

Let’s talk about the millennials in this data. We already know that they’re the least engaged generation in the workforce, and this report certainly serves to confirm it. Millennials are the most likely workers to have a dramatic reaction to something they hear in their review. 47 per cent of millennials surveyed looked at other jobs, for example. (In comparison to Gen X with 36 per cent, and baby boomers with 21%.) Seeing as millennials are fast becoming the biggest generation in the workforce, something clearly needs to be done in order to retain them.

What should change? Well, the research suggests that regular, qualitative and collaborative feedback might be the key. 80% of all workers surveyed want more feedback in the moment, rather than getting all the feedback at once in a review. Also, 60% of workers said they’d prefer qualitative feedback over numeric – so instead of rating people out of 5, they want personalized, constructive critique.

Companies around the world are utilising new, alternative ways to approach feedback. Adobe’s own method is called ‘The Check-In‘, Charlie HR utilises ‘Radical Candor’, and 15five uses a weekly 15 minute catch-up system for employee feedback. The one thing they have in common? They happen more than just once a year. Seems like a pretty simple fix to us!

These effective networking tips will take you from wallflower to work experience in no time. Some of them you can even do from home.

5 tips for working from home

Working from home requires discipline. Read all about the best ways to stay productive from the comfort of your house.