5 TV shows and films that will make you more productive

This post was written by an external contributor. Lucy Pegg breaks down the best TV shows and films to cut procrastination and get everyone feeling energised…

It’s the middle of summer, the sun is (hopefully) shining, and if you’re a student or recent graduate it’s also possible you have a lot of free time on your hands.

Even if you’re jetting off on holiday or meeting up with friends, the absence of uni’s hectic buzz can leave you with quite the void to fill. As so-called ‘Millennials’, of course the first option for filling free time is binge watching a TV series or marathoning films. Not the most productive use of time, right?

Well, potentially, wrong – pick the right thing to tune in to and you’ll find yourself more energised and ready to be productive than before you spent an hour sitting on your bum.

So what are these magical series and films that’ll get you so invigorated? Of course it’s a little down to your own taste, but here are five suggestions to get you started.

Bridget Jones is an icon; a successful working woman, a hapless singleton, and she also lives in a London flat she certainly shouldn’t be able to afford on her salary.

The former of these usually seem to get forgotten though, so I implore you to adopt Bridget as your new Queen of Productivity. Bridget manages to fend off the advances of f*ck-boy Daniel Cleaver and get it together with Mark Darcy, whilst also climbing up the career ladder – from editorial assistant to TV correspondent. By the final film she’s the producer of a news channel, as well as keeping that infamous diary.

So watch a Bridget Jones film, pull up your biggest pair of pants, stop daydreaming about Colin Firth and start doing that work.

Yes, it’s 11 years since The West Wing finished, but I’m late to the party and only recently started watching – plus nothing else has convinced me that I can be a super confident career woman quite like this dramatisation of the inner workings of the White House.

Each time I finish an episode I’m ready to start running the country, so applying for jobs or researching my dissertation is nothing.  Somehow the crazy working hours and high stress of The West Wing’s characters’ lives even seems desirable.

As a wannabee journalist, CJ Cregg – the White House Press Secretary – is my new idol and I shall channel her steely determination each time I have a to-do list to complete.

Ahhh, America. You have an idiotic president and you mispronounce the English language, but you do know how to make a high-stakes reality TV show that’s packed full of energy. It’s practically impossible to feel lazy whilst watching Project Runway, with contestants completing challenges in order to become “the next great American designer”, or just to be remembered past their season’s end.

If these designers can create beautiful dresses from potato sacks in a matter of hours (that really did happen), we have no excuse not to get busy on our far more mundane tasks.  As you struggle to craft that perfect cover letter, just picture Tim Gunn (America’s Mel and Sue, in my opinion) calmly speaking his infamous words of wisdom: “make it work”.

If anything can be used to coerce me into something I don’t fancy doing, it’s amazing vintage clothes and an unapologetic heroine.

Though Netflix’s comedy about a lost young woman who founds an über successful vintage clothing business has been panned by critics, there’s something about its feisty, almost ruthless, attitude that perhaps we more timid folk can learn from. When you finish an episode you feel that what you need to do isn’t proof-read that email for the eleventh time – you need to send it. 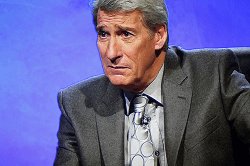 The best is saved for last. University Challenge is an institution, the highest a student can dare to dream. If the bewildering intelligence of the team members doesn’t kick your arse into gear already, just remember that they’re potentially the graduates you have to compete with for jobs (but, of course, there’s no need to worry if you’ve signed up for Debut…).

Sometimes it’s failing to correctly answer questions that I really should know that motivates me.  Other times it’s the euphoric “I can change the world” elation of getting multiple answers right. Either way University Challenge is sure to get your fingers tapping over the keyboard and your feet marching out the door towards your future – and if Jeremy Paxman can’t tear you away from procrastination, I really don’t think anyone else stands a chance of helping you either.

So next time you’re struggling to summon the resolve to get your work done, watch one of these TV or film suggestions and make that next hour on the sofa propel you into many more productive hours at your desk.

Looking for some summer reading? According to the world's top CEOs, these are the books that are going to set you ahead of the game.

May the force be with you this exam season #MayThe4thBeWithYou